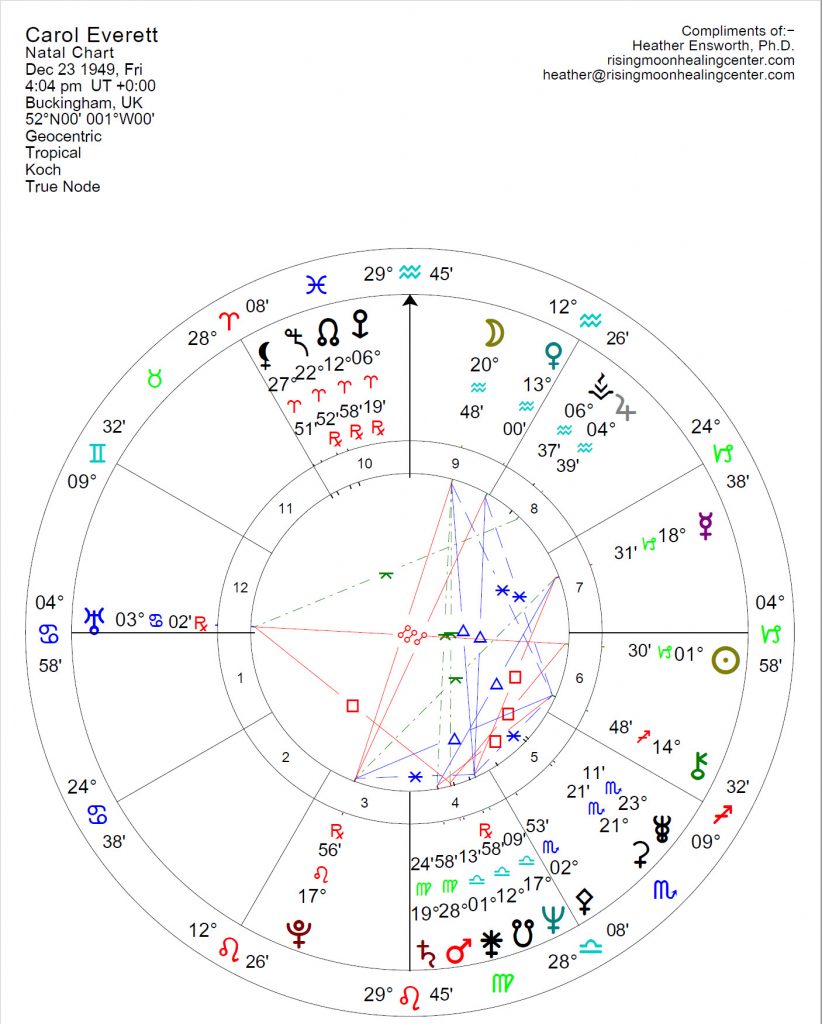 One of my area’s of interest and specialization as an astrologer has been in assessing indications of psychic and intuitive gifts through the patterns in the birth chart. These gifts are particularly prominent in people with strong aspects between the outer transpersonal planets (Uranus, Neptune and Pluto) and the Sun, Moon and Ascendant in the birth chart.
These configurations are very strong in Carol’s birth chart. She has Uranus on the Ascendant and in opposition to the Sun. This is an indication of someone who is gifted in working with energy and with channeling or “downloading” information from the higher realms. It is also an indication of being guided by synchronicities and flashes of insight. Uranus is known as the higher octave of Mercury and is our connection to divine mind or to Cosmic consciousness.
Carol also has her Moon in the sign of Aquarius (ruled by Uranus), and her Moon is in opposition to Pluto and in a trine with Neptune. These aspects give her a sense of compassion for others as well as strong intuitive gifts and a capacity to tune in to others as a deep level. She also has Neptune conjunct her south node in Libra indicating that she has come into this lifetime with strong spiritual and psychic gifts and a sensitivity and attunement to when energies are in harmony (in balance) or when they are discordant or out of balance. She also has strong aspects with Chiron and Hygeia indicating healing gifts.
Carol’s chart has in the past been compared with the birth chart of Edgar Cayce. He,like Carol, has strong aspects in his chart to all three of the transpersonal planets. Both Carol and Edgar Cayce have Uranus conjunct the Ascendant. Cayce’s Moon (in Taurus) is squaring Uranus and is also conjunct both Pluto and Neptune. Cayce’s Sun sign is
Pisces (ruled by Neptune) is in the 8th house and is also in aspect to Pluto, giving him access to what is held deeply in the unconscious mind as well as gifts in communicating with the spirits of those who have died.
Cayce was able to channel and download intuitive information while sleeping by accessing the “timeless realm” in which all information is interconnected. Carol, in a similar manner, speaks of going the realm of “No Time” for gaining her insights and drawing in healing energies.
In analyzing the synastry (connections) between Carol’s chart and Edgar Cayce’s chart, it is clear that they have a karmic or past life connection. The exact nature of that connection is not fully clear, but the dynamics between their charts indicate similar  patterns and energies in their psychic and intuitive gifts as well as in their understanding of healing.

Second comparison. from March 1987
Edgar Cayce and Carol Everett have key similarities in astrological charts according to astrologer Clanice Clarke.

Many coincidences exist in their chosen direction of work and research. Carol’s pioneering work with medical intuitive diagnosis and healing, including healing internally using the blood as a vehicle to do this follow on from Edgar Cayce’s work, and have improved on it. Edgar Cayce once said that the health of people would eventually come down to one drop of blood, he may well be right.

In Reading 283-2 he said; The day may yet arrive when one may take a drop of blood and diagnose the condition of any physical body. For, as is seen, there is no condition existent in a body that the reflection of same may not be traced in the blood supply, for not only does the blood stream carry the rebuilding forces to the body, it also takes the used forces and eliminates same through their proper channels in the various portions of the system… Hence there is ever seen in the blood stream the reflections or evidences of that condition being carried on in the physical body..”

This concept is now evident in my own work, healing using ‘re-programmed’ blood samples both real and virtual, for the immune system to adapt. Evading science still is evaluation, quantum theory is a possibility for changes that can’t be observed, though obvious in the healing and anti-ageing results. With Carol, Edgar’s statement has progressed to, ‘the use of one drop of blood can be used for the purpose of healing as well as diagnosis.

Astrologer, Clanice E Clarke was born into a respected family of astrologers. Known for many years in professional astrological circles for their interpretative astrological knowledge, experience and understanding of astrology. Clanice, practices as a consultant astrologer, regularly teaching the subject of astrology at Exeter University, UK. Clanice Clarke is also a founder member of the Exeter Astrology Group which was formed in 1996, part of the Astrological Association.

I first met Carol Everett with my mother Patience Clarke in March 1987, when she came for an Astrological consultation. My mother mentioned then the similarities between Carol and the Edgar Cayce chart, which was significant as Carol was already working as a Clairvoyant. An Initial comparison shows a similarity in the overall shape of both charts, with 4 planets in the 7th and 8th houses, Cayce having the Sun in the 8th house while Carol has the Moon in the 8th house, this being known as the Occult house. However the most outstanding connection between the charts is that both have the Planet Uranus, conjunct to their respective ascendant point, Cayce in the sign of Leo while Carols is in the sign of Cancer. This position confers the ability to tap a super-conscious level of knowledge, gaining insights beyond the capacity of the average individual. As well as the desire for leadership in groups or organisations which promote new ideas and advanced spiritual concepts.

Carol also like Cayce has the planet Uranus linked strongly to the career point in the chart, indicating professional success and even fame through unique contributions in their work.

I never made claims that I was linked in any way to Edgar Cayce or his work. I was initially consulted completely out of the blue by Patience Clarke in 1987, she was a knowledgeable astrologer of her time. Working with her mother Patience Clanice was researching the astrological charts of a few clairvoyants, mediums and similar people who were known to have gained some following. She said that she was ‘absolutely elated’ to have found that in my chart there were such strong similarities between the chart of Edgar Cayce and my own. Patience had asked for my date and time of birth etc just a few weeks earlier. The excitement was obvious when I visited, Patience and Clanice were undecided about who should tell me their findings. I had a bad feeling because they couldn’t decide who should tell me, it turned out they were undecided due to their excitement in their findings. Similarities found in my chart preparation had accumulated to point to the Edgar Cayce link. It’s significance became the main subject of the next meeting. At the time it was lost on me. It meant nothing really, I did not even know who Edgar Cayce was. So the information meant very little. Edgar who, I asked.

The importance to the astrologers was lost on me. Patience told me all about Edgar Cayce, his work and indicated that astrologically I would follow on with very similar work myself. Indications were I could perhaps follow on from his work. I remembered what I had been told, it sank in. The work I was already doing for patients, the method of medical intuitive diagnosis I used already with success made me pleased it had been done before. Similarities in other areas were already obvious particular my readings and theories about the blood for more intense healing. At this time I was working mainly as a clairvoyant, but even then the medical diagnosis part of my work was increasingly featuring more strongly.

The name Edgar Cayce over the following ten years would not go away. The diagnoses I was producing for patients were being recorded and verified on a regular basis with doctors and medical specialists. Their accuracy being more widely acknowledged in healing circles and more doctors. People from the UK and USA were mentioning the way I worked was similar to how Edgar Cayce worked. When working on really hard cases, with very difficult diagnosis, on occasions I send out to the energies and asked Edgar subconsciously for help. He often ‘replies’, always making complete sense. Many times the name Edgar Cayce came up to describe how I was apparently doing my work. This came to the attention of film producer, director and writer, Mellisa Jo Peltier, USA, at that time working for paramount pictures. She was visiting the UK for a TV documentary segment about my diagnosis and healing work. She surprised me by making the same observations and offered me some advice. She was however in a unique position to know, observe and compare. Only the year before she had worked on a similar project surrounding Edgar Cayce and “The Edgar Cayce files” in Virginia Beach. She and had extensively researched his work for another project and was exceptionally familiar with all things Edgar Cayce. She pointed out to me a few of the Edgar Cayce books which she had read and how the similarities in the work we did meshed and the situations that were so similar and all too real.

After filming with Melisa I decided to contact Clanice Clarke again, 12 years later this was 1999. I wanted to see if she could throw light on the subject, regarding the earlier readings and observations made by her and her mum Patience in 1987, the Edgar Cayce links. This year will be highly significant for Carol professionally. Especially after the Solar Eclipse of August 11th which falls opposite her moon in the 8th house. The Moon is the ruling planet of Carols chart, therefore very important and being in the 8th house will be putting increased emphasis on her occult work. This Solar Eclipse will also be highlighting the Edgar Cayce chart very strongly, which may trigger a renewal of interest in both him and his work by the general Public and thereby anyone like Carol who works in such a very similar way.

The report above is an initial report by Clanice. Charts are not shown here.

Around 1999 I started being filmed for a number of TV programs for the USA and UK, this lead to many other opportunities and the segments have been aired multiple times worldwide. My research into current blood droplet healing techniques also started development shortly after 1999 (click here to see blood drop healing page). The results already proving the concept. Now in 2019 it is commonplace with many doctors using Platelet Rich Plasma (PRP) technique. In 1999 when I started doing external PRP (working on extracted blood) it was considered well outside the box, too dangerous, possibly fraught with potential problems and virtually unknown. In this research I was at least 15 years ahead of common PRP practices. I have now developed this further and no longer need to have the blood extracted to work on it. I am able to focus my mind on the individual, this can be done at distance, tuning myself into their unique frequency. I concentrate my energies creating an Energized PRP (EPRP). My EPRP version is proving to be more effective for healing and anti-aging, when scientifically tested by doctors and scientists. Carol x